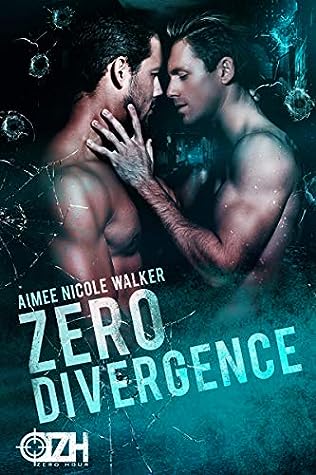 Zero Divergence, noun: no deviation from a course or standard.

After a key piece of evidence goes missing, a suspected serial rapist and killer evades prosecution. More than Royce Locke’s reputation is on the line when his investigation into the failed chain of custody suggests Franco Humphries might’ve had inside help. There’s no one Royce trusts more than Sawyer Key to help him right a wrong and uncover the traitor in their midst, but can they do it before the Savannah Strangler strikes again?

Relentless plus fearless equals flawless. Sawyer and Royce have come full circle—from hostile strangers to best friends and lovers. Neither a sniper’s bullet nor an arsonist’s fire could keep them apart, but what about a psychopath hell-bent on revenge? The stakes are high, and there’s no turning back now because the zero hour is upon them. Tick tock.

Zero Divergence is the conclusion to the best-selling Zero Hour series, which follows Locke and Key’s investigations and evolving relationship. This is a series you MUST read in order. It contains mature language and sexual content intended for adults 18 and older.

Trigger warning: Part of the storyline involves coming to terms with a friend’s suicide, which may be difficult for some people to read.

Check out my review and enter the giveaway—>

I am a big fan of the whole “two alpha men loving on each other” and this series has drawn my attention right from the start. I di have to say that it was a bit of a wobbly start with the slow burn insta-love vibe I got …but it turned out great …at least for me 😉

Sawyer and Royce are head over heels in love while also enjoying being partners on the job. They have been through plenty in a very short amount of time and I do feel that they deserve their happy ever after. But there is still some unfinished business lurking and so they will have to buckle up…

I love the combination of romance and suspense in this series and this final book definitely brought me to the edge of my seat.

I really enjoyed seeing Locke and Key getting closer and closer, but I also loved all the awesome secondary characters. I can’t wait for the promised spin-off. Which of course will also give us some insight into how these two are doing 😉

“Oh my god,” he said as the chocolate cake melted in his mouth. “I need this for every occasion.”

“I’ll bake it once a week if you promise to listen to orders from now on,” Royce said, taking a bite for himself.

Sawyer met Royce’s stormy eyes. “I’ll agree to that if you promise not to give stupid orders.” He opened his mouth like a baby bird, and Royce gave him another bite. It was somehow more delicious than the first.

“It wasn’t burning when I ran into it,” Sawyer countered. “You ran into the burning building.” He couldn’t be mad at Royce, because chances were, he’d be dead if Royce hadn’t risked his own life to pull Sawyer out of the inferno.

They stared at one another in a silent battle of wills for a few seconds before a big yawn ruined Sawyer’s fierce expression. “We’ll resume this after I take a power nap.” Smiling, Royce leaned forward to set the plate on the coffee table, but Sawyer stopped him. “But not until after I eat more cake.”

Royce aimed a cocky grin at him. “Got you hooked now.”

Ever since she was a little girl, Aimee Nicole Walker entertained herself with stories that popped into her head. Now she gets paid to tell those stories to other people. She wears many titles—wife, mom, and animal lover are just a few of them. Her absolute favorite title is champion of the happily ever after. Love inspires everything she does, music keeps her sane, and coffee is the magic elixir that fuels her day. I’d love to hear from you

#𝗥elease𝗕litz Rule: The Finale by L A Cotton is LIVE!!! Read the conclusion to Eva and Rafe's story today, and fall in love with Rafe Hunter and the boys from Black Hearts Still Beat 𝗡𝗢𝗪 𝗟𝗜𝗩𝗘 #𝟯 𝗥𝘂𝗹𝗲: 𝗧𝗵𝗲 𝗙𝗶𝗻𝗮𝗹𝗲 Books2read.com/RuleBHSB Audio coming soon 𝗔𝗕𝗢𝗨𝗧 𝗧𝗛𝗘 𝗕𝗢𝗢𝗞: Rafe Hunter thought he was destined for two things in life: playing guitar, and keeping his brother on the straight and narrow. Until Eva. She makes him want to be better. Makes him dream of life after the band. But Black Hearts Still Beat is all he’s ever known. Rafe wants a future with Eva but when you’re choosing between your heart and head, fame or the future, nothing is ever simple. Music saved them, but is it finally time for Rafe to let his heart rule? Or will love be the ultimate downfall of Eva and her Black Hearted boys? 𝗦𝗧𝗔𝗥𝗧 𝗧𝗛𝗘 𝗦𝗘𝗥𝗜𝗘𝗦 𝗙𝗥𝗘𝗘 𝑓𝑜𝑟 𝑎 𝑙𝑖𝑚𝑖𝑡𝑒𝑑 𝑡𝑖𝑚𝑒 #𝟭 𝗥𝘂𝘀𝗵: 𝗧𝗵𝗲 𝗕𝗲𝗴𝗶𝗻𝗻𝗶𝗻𝗴 https://books2read.com/RushBHSB Audible US: http://geni.us/RBZkrM Audible UK: http://geni.us/XPqCxuN #𝟮 𝗥𝗶𝘀𝗲: 𝗧𝗵𝗲 𝗜𝗻𝘁𝗲𝗿𝗹𝘂𝗱𝗲 Books2read.com/RiseBHSB Audible US: https://geni.us/Pdes Audible UK: https://geni.us/gQXeLO 𝗔𝗗𝗗 𝗧𝗢 𝗚𝗢𝗢𝗗𝗥𝗘𝗔𝗗𝗦 http://bit.ly/RushBHSB http://bit.ly/RiseBHSB http://bit.ly/RuleBHSB @authorlacotton #RULE #ReleaseDay #ReleaseDayBlitz #LACotton #LACottonBooks #OutNow #BlackHeartsStillBeatSeries #Bookstagram #NewRelease #Bookshelf #BlackHeartsStillBeatTheFinale #RafeHunter #RockstarRomanceBooks #SeriesFinale #RuleBHSB
A KING SO COLD (Royals #1) by @ellafieldsauthor is NOW AVAILABLE!! Blurb: When marrying your enemy is only the beginning... Once upon a time, there lived a princess so cruel that even her husband tried to destroy her. The results left her without a father, her husband without a memory, and herself as queen to a kingdom on the cusp of war. Even so, after learning of her treasonous husband’s upcoming nuptials, she set out to find him and locked him in her dungeon. There, and only there, would she unveil a time when she once allowed herself to be vulnerable. A past detailing how her heart was coaxed to beat outside her chest, only to have it crushed by the cold hands of betrayal. But true vengeance will need to wait. War is coming, and with it, decisions and danger masked in treacherous beauty. All too soon, the young queen will learn that time could be the most dangerous foe of all. For it is time that would reveal all the ways a dead heart can beat anew. From bestselling author, Ella Fields comes an all new sexy, action-packed, adult fantasy romance. Recommended for 18+ #bookstagram #escapereality #readersofinstagram #favoriteauthor
Escape reality!!! #realitysucks #readersofinstagram #readersliveathousandlives #escapereality #booksaremagic
🖤 𝗧𝗘𝗔𝗦𝗘𝗥 & 𝗣𝗥𝗘-𝗢𝗥𝗗𝗘𝗥 𝗕𝗟𝗔𝗦𝗧 🖤 We are excited to share the first teaser from an all-new angsty and addictive series from bestselling author L A Cotton, coming June 2!!! 𝘞𝘩𝘢𝘵 𝘺𝘰𝘶 𝘤𝘢𝘯 𝘦𝘹𝘱𝘦𝘤𝘵 𝘧𝘳𝘰𝘮 𝘝𝘦𝘳𝘰𝘯𝘢 𝘓𝘦𝘨𝘢𝘤𝘺... 🖤 New adult / college 🖤 Mafia 🖤 Forbidden romance Check out the book trailer here >>> https://bit.ly/PoHTrailer PRE-ORDER PRINCE OF HEARTS NOW US: https://amzn.to/2UwuX0Y UK: https://amzn.to/2QFlFii CA: https://amzn.to/3dm6wvW AU: https://amzn.to/2Ur33U5 B&N: https://bit.ly/3abD4qx Kobo: https://bit.ly/2J9h3Nb Apple Books: https://apple.co/2WuLHIw 𝗔𝗗𝗗 𝗧𝗢 𝗚𝗢𝗢𝗗𝗥𝗘𝗔𝗗𝗦 📖 PoH >> bit.ly/PrinceofHearts 📖 KoS >> bit.ly/KingofSouls 𝗩𝗢𝗧𝗘 for Prince of Hearts on June’s most anticipated list >>> https://bit.ly/3ahZWEA 𝗦𝗜𝗚𝗡 𝗨𝗣 💻 Bloggers >> http://bit.ly/PrinceofHeartsEVENTS 📸 Bookstagrammers >> http://bit.ly/PrinceofHeartsBOOKSTA #lacottonbooks #newseries #veronalegacy #princeofhearts #niccolomarchetti #mafiaromancebooks #forbiddenromancebooks #collegeromancebooks #newadultbooks #comingsoon #lacotton #teaserreveal #bookpreorder @authorlacotton @givemebookspr