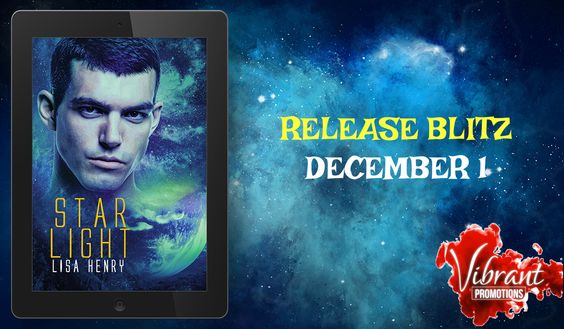 Check out the long-awaited awesome 3rd book in the Dark Space series, by Lisa Henry!

Brady Garrett is back in space, this time as an unwilling member of a team of humans seeking to study the alien Faceless and their technology. It’s not the first time Brady’s life has been in the hands of the Faceless leader Kai-Ren, and if there’s one thing Brady hates it’s being reminded exactly how powerless he is. Although dealing with the enigmatic Faceless might actually be easier than trying to figure out where he stands with the other humans on board, particularly when one of them is his boyfriend’s ex.

Cameron Rushton loved the starlight once, but being back on board the Faceless ship forces him to confront the memories of the time he was captured by Kai-Ren, and exactly how much of what was done to him that he can no longer rationalize away. Cam is used to being Brady’s rock, but this time it might be him who needs Brady’s support.

This time Brady is surrounded by the people he loves most in the universe, but that only means their lives are in danger too. And when Kai-Ren’s fascination with humanity threatens the foundations of Faceless society, Brady and Cam and the rest of the team find themselves thrust into a battle that humans have very little hope of winning, let alone surviving.

Check out my review and read an excerpt!!—->

This book has been a very very long time coming. It doesn’t matter though because it was definitely worth the wait. I would have waited a few more years for this one if needed. That’s how much I wanted to know how Brady, Cam, Lucy, and even Kai Ren were doing.

The first two books were definitely favorites of mine and I can happily say that this third one will also be making my “Top Reads” list. That said… there were also some things that made me a bit sad…

Now I am not gonna spoiler this book. It should be read spoiler-free, so I am gonna do my best not to ruin it for others.

Let me start by saying that this book should not be read as a stand-alone. You won’t be able to make head or tails of it. Start with book 1, Dark Space and let yourself be taken away into the wonderful world of Brady Garrett… you won’t be sorry. I am not so big on Sci-Fi, but this series rocked my world!!

Speaking of Brady, he is still my absolute favorite in this series. I love his awesome grumpy sarcastic self, and I am glad to say that he hasn’t changed that much in that respect. He has matured a bit though, but he still hates the black…with a passion

Thankfully Cam is still right there by his side to keep the grumpiness down to a manageable level and Lucy really brings out his softer side. Chris however still annoys the hell out of Brady, so there is still that. I wouldn’t be so happy being stuck in outer space with my boyfriend’s ex either!!

Cam only loves Brady though… They even found some little secluded place to really be together and let me tell you … HOLY HOTNESS.

We find out a whole lot more about Kai Ren and the Faceless in this book and not all of it is as I expected. Especially the second part of the book had me on the edge of my seat. There were so many different emotions going through me while reading this book… sadness, anger, fear, surprise, joy, and love… so much freaking love!!

In the end, even Chris had grown on me and I really wouldn’t mind if he got a book of his own… hint hint hint. For Brady and Cam…and, of course, Lucy, this was the perfect ending though. But you never really know, what the future might bring. And what is lurking out there in the big black !!!

I highly recommend this series!! 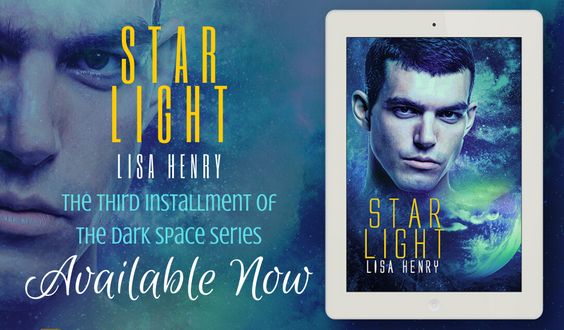 That night I woke up with a start.

Cam made a soft noise beside me, and kept sleeping.

I sat up and swung my legs over the side of the bunk. The floor was damp and sticky against my bare feet. I didn’t care. Barely noticed it anymore. I just reached under the bunk and dragged my footlocker out. Opened it and found my cigarettes.

“Bad dream?” Chris Varro asked in a low voice from the bunk on the opposite wall.

I hadn’t known he was awake.

I lit my cigarette. “Hot dream,” I lied.

I’d had my fair share of wet dreams about Chris. And they weren’t just when I’d shared dreams with Cam. Pretty sure I’d come up with some all on my own. And I wish I could say that was the weirdest thing about my life, but it barely made the list. And if it was weird for me to be sharing a room with my boyfriend’s ex, how fucking weird was it for him to see us together? At least he didn’t try to pull rank on me anymore, and I didn’t try to stab him in the throat with a screwdriver. We were a work in progress, Chris and me.

Chris’s bunk creaked as he rose to his feet. He walked to the doorway, and beckoned me to follow.

“Those damn bunks,” he said, rolling his shoulders as he led me down the slope of the corridor towards Doc’s medbay. “I don’t know how you and Cam can fit in a single one.”

“We make it work,” I said. Cam slept in the bunk next to mine in theory, but in practice we usually ended up wedged close together in the one. I wondered if Chris was jealous. I would have burned with it if I’d had to see Cam with another guy. It was bad enough I’d seen it in his memories.

Chris regarded me silently for a moment, a sort of half smile on his lips, and I remembered—I felt—exactly why Cam had fallen in love with him. Chris was a good-looking guy, but more than that, he was smart and he was ambitious, but not in the way a lot of military guys were. Chris didn’t give a fuck about rank or prestige or how many medals they gave him. He was driven by something outside of all that. Chris wanted to unravel all the mysteries of the universe. No wonder that Cam, chasing starlight, had fallen so easily into his orbit.

They’d been perfect together, at least for a while.

“I like you, Brady,” he said. He reached forward and plucked my cigarette from between my fingers. Took a drag on it, and gave it back. “You don’t like me, but I like you.”

“You steal my fucking cigarettes and of course I don’t like you.”

His smile widened. “We both know that’s not the reason why.”

I shrugged, because there was no point denying it.

“I know we are,” I said, trying not to bristle, because I couldn’t quite read him. I couldn’t tell if he was being friendly, or if he was being a condescending prick and implying Cam and I needed his fucking approval or something. Usually I thought the worst of people and usually I was right, but lately I was trying to, I don’t know, be a better person or some bullshit. I at least wanted to set a better example for Lucy, so that she didn’t have to look at me and then look at all these other guys and wonder why I wasn’t like them. I didn’t want her to like them more than me because they weren’t angry and afraid all the time.

Chris stared at me for a long moment, and I wasn’t sure what he was looking for. “Whole universe out here,” he said at last, “just like Doc says, and you’re still living in your own head.”

“So what if I am? No fucking law against it.”

His mouth turned up in a faint smile. “Don’t forget I’ve been inside your skull, Brady. How do you even stand it? It’s so loud in there.”

I blew smoke in his face and ignored the way my stomach twisted.

He smiled again and shook his head. When he spoke his voice was tempered with sympathy, and that’s what made me hate him the most. “Whole universe out here, Brady, right in front of your eyes, and you’re still too afraid to look at it, aren’t you?”

I left the asshole standing there, wreathed in the pulsating lights of the Faceless ship. 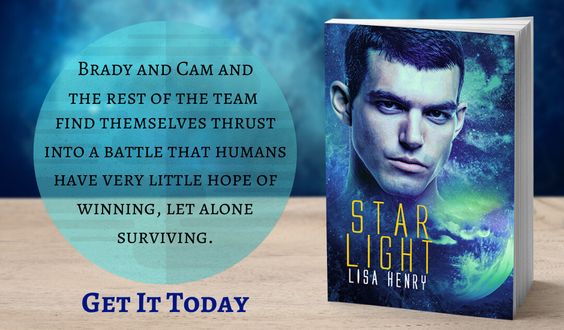 Lisa likes to tell stories, mostly with hot guys and happily ever afters.

Lisa lives in tropical North Queensland, Australia. She doesn’t know why, because she hates the heat, but she suspects she’s too lazy to move. She spends half her time slaving away as a government minion, and the other half plotting her escape.

She attended university at sixteen, not because she was a child prodigy or anything, but because of a mix-up between international school systems early in life. She studied History and English, neither of them very thoroughly.

She shares her house with too many cats, a dog, a green tree frog that swims in the toilet, and as many possums as can break in every night. This is not how she imagined life as a grown-up.

Lisa has been published since 2012, and was a LAMBDA finalist for her quirky, awkward coming-of-age romance Adulting 101.