Check out the 8th book in the awesome “Hades Hangmen” series by Tillie Cole! 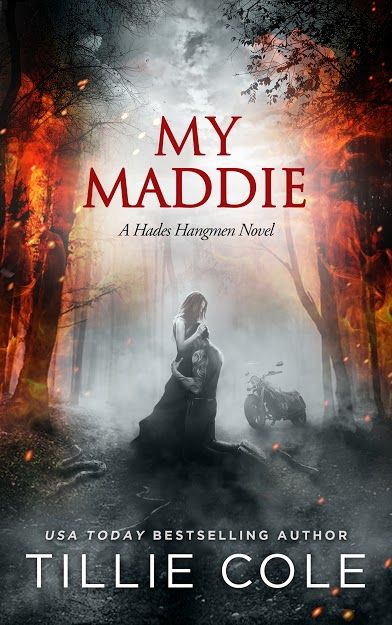 Not even love can conquer the demons of our pasts…

Flame and Maddie have found solace and safety in one another’s arms, two fractured souls beginning to heal. But no matter how strong their love grows, it can never completely vanquish the demons of their pasts. These demons are dormant, not defeated.

Now a new enemy threatens the Hangmen, and a new revelation threatens the peace Maddie and Flame hold so dear. Flame is fighting a multitude of wars – against the club’s new foe, against the horrors of his past, and against his fears – but the fire in his blood may be the only victor.

As Flame begins to spiral into his own personal hell, it is up to Maddie to bring her husband back into her heart. To remind him that, together, they can face any obstacle standing in their way. To show him that no one and nothing can tear them apart again.

The fight for their forever.

Tillie Cole hails from a small town in the North-East of England. She grew up on a farm with her English mother, Scottish father and older sister and a multitude of rescue animals. As soon as she could, Tillie left her rural roots for the bright lights of the big city.

After graduating from Newcastle University with a BA Hons in Religious Studies, Tillie followed her Professional Rugby player husband around the world for a decade, becoming a teacher in between and thoroughly enjoyed teaching High School students Social Studies before putting pen to paper, and finishing her first novel.

Tillie has now settled in Austin, Texas, where she is finally able to sit down and write, throwing herself into fantasy worlds and the fabulous minds of her characters.Tillie is both an independent and traditionally published author, and writes many genres including: Contemporary Romance, Dark Romance, Young Adult and New Adult novels.

When she is not writing, Tillie enjoys nothing more than curling up on her couch watching movies, drinking far too much coffee, while convincing herself that she really doesn’t need that extra square of chocolate.