Check out the cover and blurb of the 6th book in the awesome “Fake Boyfriend” series! 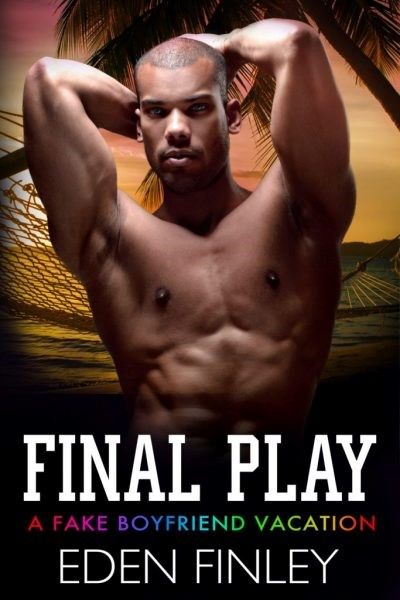 It’s a vacation none of them will forget.

Before their futures become the present, Noah convinces his friends they need a group vacation—a final play before they’re all tied down by responsibility and unyielding schedules.

A trip to Fiji is the last hurrah to end all hurrahs.

And from disastrous marriage proposals to grand gestures to life-changing confessions, two weeks on a private island becomes the beginning of the rest of their lives.

Final Play is a 50,000 word novel told in the point of views of all ten Fake Boyfriend main characters. It contains the boys’ final HEAs. It is not intended to be read as a stand-alone.

Check out an excerpt and enter the give-away! —–>

“You’re late,” Soren taunts as we enter the food hut.
In his defense, we are the last ones here.
Group vacation. Who’s idea was that?
“Shut it, Canada,” Maddox says.
Poor Soren—a Canadian living in New Jersey. He’s the butt of most of Maddox’s
jokes when they’re in the same room.
Secretly, I think Soren loves it though. He always shrugs it off, because he knows
Maddox is only joking even if he claims not to be.
“This is Damon’s first proper vacation in four years. We’re making the most of it,”
Maddox says.
“I would too,” Soren mumbles and takes a sip from his liquor-filled coconut.
“We need to get Soren laid,” Noah announces. “Where can we find some Fijian
rent boys?”
Soren chokes on his drink and splutters everywhere.
“Not a good idea,” Joni, the owner of this island, says. “Very illegal in Fiji. Unless
you like jail.”
“Soren might like jail considering his dry spell,” Ollie says.
“Don’t … need … a prostitute,” Soren says in between coughing. “Thanks though.”
Matt turns to Talon and Miller. “You guys used to have threesomes all the time.
Maybe you can throw Soren a bone.”
“Totally would,” Miller says, “but it turns out Talon’s one possessive
motherfucker. Sorry.”

Talon winks at Soren.
When everyone at the table laughs, I feel kinda bad for him.
He asks for another drink.
“You do need to get over what’s-his-face,” I say to him.
He holds up his coconut. “That’s what this is for.”
“Come wakeboarding with us tomorrow,” Miller says. “That’ll take your mind off
him.”
“I was thinking of going for a hike to the top of the headland.”
Beside me, Maddox tenses.
“Hey, aren’t you guys doing that?” Matt asks us.
We are? That’s news to me.
“No,” Maddox says quickly. “I mean … we are, but … like …”
“They’re gonna have sex up there,” Noah says, and Maddox tenses more.
I have no idea what’s going on with him right now, and I don’t get the chance to
ask him to give me an explanation.
Ollie leans in closer to Soren. “For what it’s worth, Bryce wasn’t the right guy for
you.”
“I know,” Soren says, but he doesn’t look convinced.
“He didn’t even like hockey,” Ollie adds.
“I don’t like hockey,” Lennon points out, “but I’m not a dick about it like him.”
“You love hockey,” Ollie says. “You’re just stubborn about admitting it.”
“Guys,” Maddox says, “we’re not getting into the sports debate again.”
Despite Maddox saying not to start a debate, of course, we do.
“None of you guys have the stamina to go nine plus innings,” I say.
“Any sport where you only need to wear a cup as padding can’t be classed a
superior sport,” Talon argues, and the other two football players agree.
I’m not having that. “Says the people who only have to play a maximum twenty-
two weeks of the year.”
Ollie and Soren look at each other as if having a silent conversation.
Then Ollie nods and turns to us all. “All I have to say is, if we were to put ice
skates on you assholes, you’d all fall on your faces. We could hold our own
playing your sports. Also, twenty-six weeks in the regular season, bitches. Then

another nine for the Cup. Bow down to your wicked cool superiors.” He nudges
Soren.
“Yeah, what he said.”
“I can’t believe we’re having this discussion again,” Noah says.
“I told them not to start it,” Maddox agrees.
I wrap my arm around Maddox. “As the only two non-sporting people here, you
guys get no opinion.”
“Yeah, yeah, yeah,” Maddox says. “You’re all big, bad athletes. Do any of you
other badasses scream high-pitched at a spider in the bathroom?”
“We’re in Fiji,” I emphasize. “What if Fiji’s like Australia and all the wildlife is
trying to kill you?”
Everyone laughs at me, of course, and I’m happy I’m the focus of mockery instead
of Soren.
Even so, he says he needs some air and excuses himself. He’s a little wobbly on
his feet. Maybe he drank too much too fast.
I go to stand to go after him, but Ollie beats me to it.
“I’ll go.”
More mockery occurs in their absence, mainly at me and the masculine way in
which I handle spiders.
Again, I ask myself: whose idea was a group vacation?

Eden Finley is an Amazon bestselling author who writes steamy contemporary romances that are full of snark and light-hearted fluff. She doesn’t take anything too seriously and lives to create an escape from real life for her readers. The ideas always begin with a wackadoodle premise, and she does her best to turn them into romances with heart. With a short attention span that rivals her son’s, she writes multiple different pairings: MM, MMF, and MF. She’s also an Australian girl and apologises for her Australianisms that sometimes don’t make sense to anyone else.

One of Five ARC’s for Final Play